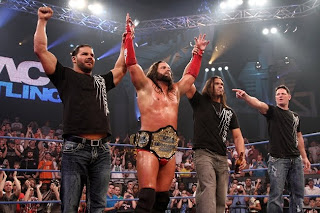 Opening promo: Sting comes out to a great reaction. He says he got the real Hogan back, and he got TNA back for Dixie Carter. Sting says Hogan did the right thing, and then Hogan comes out. Hogan says he's been wrong for the past year or so. Hogan says Eric helped him through the times, and sided with him on business decisions. Hogan shakes Sting's hand, leaving the ring. Dixie Carter comes out to the ring. Sting says this is Dixie's second chance, and she can't make mistakes. Dixie promises she won't. Dixie says Sting will have to help her out, and he agrees. Kurt Angle then comes out to the ring. Angle says Dixie lied to him, that's why he's in Immortal. Angle says he will represent TNA, and that he's the best. Sting announces Roode vs Angle for the title, but Angle says the contract only allowed Roode to have one match. James Storm comes out to the ring, and says he'll take the match for Roode. Sting makes it official. SO MUCH EFFING TALKING, JESUS CHRIST. Almost the entire first hour was blown on this promo.

Longest match of the night, and it wasn't that good. Tara/Tessmacher retain.

Jeff Jarrett/Jeff Hardy promo: Jeff Jarrett comes out with Karen, and calls out Jeff Hardy. Jeff Hardy comes out. Jarrett says Hardy can't just get his chance back cause Dixie is back in control. Jeff says nobody cares about Hardy. Hardy says the fans want him in TNA. Jeff J strikes Hardy, and they go at it, and guards come out to stop the brawl. Jarrett low blows Hardy, and leaves.

Kurt Angle segment: Angle says nobody gets the upper hand on him. He throws a chair to end the segment.

Eric Young/Robbie E/Rob Terry segment: Robbie E shows up to EY, and wants a TV title shot because he deserves it. Eric says he knows cause Robbie is a Jersey Shore star, then he insults Terry. Eric Young says he's bringing back up from the Jersey Shore to take Robbie out.

Abyss dominated Gunner, and Gunner left and got counted out. That was it, seriously.

Velvet Sky segment: Velvet says the moment was worth it. She says she owes it all to the fans, and that she's going to thank them.

Ric Flair/Immortal segment: Flair is talking to Immortal, and Gunner comes in, saying that was the monster out there. Eric has no idea what Gunner is talking about, and Immortal leaves.

Velvet Sky/Karen Jarrett promo: Velvet says she is proud to be Knockouts Champion. She says the fans are great. Karen comes out with Traci. Karen screams, and asks security to take Velvet and Traci from the ring. Madison Rayne walks out, when Gail Kim attacks Velvet Sky from behind. Great to see Gail back!

Eric Bischoff/Hulk Hogan promo: Eric comes out with Immortal. He calls Hogan out, and out comes Hogan. Hogan says Eric has one chance to say whatever he wants. Eric asks how Hogan could betray Immortal, and that he made Hogan what he is today. Eric talks about his son, and slaps Hogan. Immortal surrounds Hogan, but Sting makes the save. Eric's son is on the ramp, and Eric rips his shirt off. Eric's son punches Eric right in the face, and gives the thumbs up to Hogan.

James Storm/Robert Roode segment: James says he wish he had more time to prepare for this match. Roode says it's his time, and tells James to win. James walks to the stage.

All the match was... was punches by Angle, and kicks, then Storm hit the super kick to become the NEW World Champion. Storm went into the crowd, and Fortune brought beer to the ring. They all celebrated the victory. Storm says it's good to be on top, Roode is glad James won.

Conclusion: Shit show. Just like last year's post-BFG show... all talking, little wrestling. I do not see the point of James Storm being champion, and there was so much talking that the match was rushed. Gail Kim's return is the only good thing noting.

- Swerve with Storm being World Champion