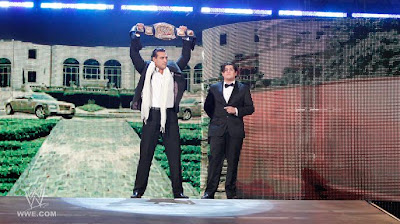 Its Friday night, crack the cold ones and put the parents to bed. Its time for Friday night Smackdown. Like Monday we are coming again live (ish) from Mexico, but unlike Monday …. and unlike anywhere in the world for that matter the fans in attendance are behind their hometown superestrella Mr Del Rio.

Back form the break and we start the night with a reply from Monday's night. Morrison's music hits and the bell rings. Despite an impressive effort by John Morrison, the power of Mark Henry would win out as Henry plants Morrison with the World’s Strongest Slam en route to picking up the win. Regarding Morrison, weighing into the will he or wont he leave debate. Its hard to say but if there is one Superstar on the WWE roster that im tired of seeing (Cena aside!) its the Prince of Parkour. Nothing against the guy, but nothing for him either. For me, a move to TNA would do him wonders. Back to the match, despite the length it was a sold opener which continues to cement Henry as the man to top on the blue brand. 6.5/10

Backstage post match and WWE scramble to fill card for Sunday's Vengeance PPV. Thanks to Teddy Dolph Ziggler will be involved in two matches now with the second being, and much predicted US title shot for your main Broski, Zack Ryder! Plus, Christian will get “one more match” against The Great White one Sheamus. Christian and Sheamus will no doubt put on a great match. Regarding Ziggler and Ryder, this could be a great way for WWE to give Ryder some belt time but have Ziggler and Swagger gain the tags titles as WWE continue to build the tag division. Vengeance just got interesting.

Next up its time for “The Great Barret uprising” to take on “buzzkill” Danial Bryan .. not my words. In a renewal of their rivalry, former Intercontinental Champion Wade Barrett went one-on-one with Daniel Bryan. In the end, it was Wade Barrett hitting Wasteland on Daniel Bryan en route to picking up the win and continuing the losing streak of “Mr. Money-in-the-Bank”. Looking back in hindsight, because thats a wonderful thing I cant see why WWE would give the blue briefcase to Bryan. Sooner or later you would think the briefcase will become a stipulation in much the same way a belt becomes available. Regarding tonights match this was much a physical affair as ive seen from these two in awhile. 7/10

Commercials over next on tonights card was Smackdowns turn for the obligatory heels vs faces tag match. In tonights mix we have Ziggler teaming with Christian taking on Sheamus and Ryder. The crowd is really hot though as all four superstars hit their high spots for the fans in attendance. In the end, it was Christian trying to give his team the advantage by distracting Sheamus, but the plan backfired as “The Great White” blasted Dolph Ziggler with a vicious Brogue Kick en route to pinning the United States Champion to pick up the win for his team. After the match during the commercial break, Sheamus was making his exit when a frustrated Christian re-emerges, blasting Sheamus with a Spear on the stage! 7/10

(Promo) Rhodes yes, Orton no. Regarding my two cents. I always thought the clear acrylic mask for Rhodes was pointless as a mask should hide the combatants face. As time flies and its now considered something of a weapon moreso something to “hide” behind, it really works. A lot of hype fot this one Sunday. Fingers crossed the match delivers.

For tonights main event its time for Big Show and Del Rio. After surviving the cross armbreaker of Alberto Del Rio, Big Show looked ready to deliver the chokeslam to the WWE Champion, but Del Rio’s personal ring announcer hops on the back of Big Show, leading to the disqualification. After the match, Big Show levels Rodriguez with the W.M.D., following it up with a second W.M.D. to the WWE Champion. Can anyone stop Big Show this weekend? 6/10

Post Smackdown and post Mexican tour full props goes to the crowds in attendance, they really appreciate the craft south of the border. Only critisisim of the night would be the main event which really didnt do much to want me to watch more. A big push for Sunday's Vengeance though did bring some symmetry to tonights show. While Sunday is looking promising on some fronts. I think we all can agree its Survivor Series in November we are focused on as we look towards Wrestlemaina 28 and returns of some big name Superstars. Till next time.