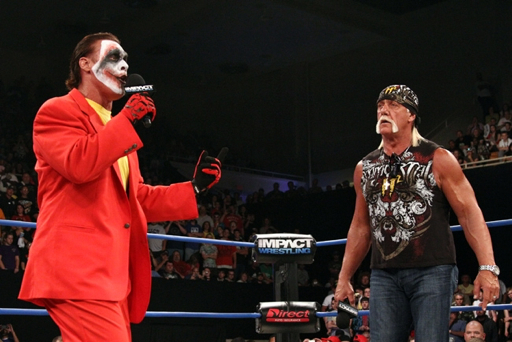 Introduction: The 10/6 edition of Impact Wrestling featured the first of two tapings from Knoxville, Tennessee. Also, Hogan's "retirement" celebration takes place, and Roode must take on his partner Storm, per order of Angle's plan!

Opening promo: Beer Money comes out to the ring. Storm says it's about time that Hogan takes a backseat, and let's the younger stars shine. Storm says him and Roode will tear the place down tonight. Roode welcomes Storm back home to his state, and says Fortune is family. He says he needs Storm to bring his best. Storm says he always saw Roode as a future World Champ, and that he'll bring it.

This was a decent match, nice opening bout. Gunner got the win with an impressive submission, but wouldn't let go, giving Kaz the win via DQ. Gunner says "screw you all" as he headed to the back.

Not a big fan of either guy, but Anderson's emphasis on "ANYWHERE" made it seem like it's going to be a good brawl.

Eric Bischoff segment: Bischoff says his head is all over the place, and says Hogan's retirement is tough. Eric says they've handled business together, and that it's the end of an era.

Brian Kendrick segment: Kendrick is ranting about philosophy. He says he knows Aries' weaknesses', and that he's cleaning up the X-Division, and that guys like Kash are scumbags. Kid Kash attacks Kendrick, and tells him to clean his own blood.

This was alright for a Knockouts match. Certainly better than any Divas match recently. Madison stole the victory for her team.

Kurt Angle/Eric Bischoff segment: Angle says he told Hardy to not show his face around TNA again. Angle wants to handle business, but Bischoff says he will.

Eric Bischoff/Jeff Hardy promo: Bischoff calls Jeff out to the ring. Eric says he's had the honor to work with the greats, guys that have paved the way for guys like himself and Jeff. Bischoff says he never dropped the ball, but that Jeff has turned that into an artform. Bischoff says Hardy is done, and to leave the ring. Hardy says he's glad EB spoke his mind. Jeff hits the Twist of Fate, and Immortal runs out, but Jeff exits through the crowd.

Jeff Hardy segment: Jeff says if he took what EB said, that would be wrong. He says if he's out of TNA, it's on his own terms.

Good match. A mix of brawling, and technical wrestling. Nice feud going on between these guys. Crimson wins to remain un-defeated!

James Storm segment: James says he's happy for Roode, and that he's happy to prove he's one of the best. Storm says Robert says it pays to be Roode, Storm says he forgot his wallet, so sorry about your damn luck!

Robert Roode hype package: Roode talks about TNA, and his title match. Roode's parents' talk about how much Robert wants the title. He says he has respect for Angle, but doesn't get his deal, and that he doesn't care. Roode says nobody can hold him down.

Great match. Excellent main event. Technical wrestling was showcased, and the match could have gone either way, and it was the best way to have Roode end the Fortune gauntlet. Angle came out during the match, and shoved Storm into the steel steps. Roode picked up the win.

Hulk Hogan's "retirement" Ceremony: The crowd chants "Hogan". Hogan says he woke up, and realized that today was his last day in the business. Hulk says when he arrived, Knoxville showed him love. Hogan says Hulkamania has been the longest run in history, and that it's time for it to be put to rest, and to let the celebration begin.

Sting comes out dressed in red and yellow. Sting asks the fans if they're buying into this crap. Hogan says Sting needs to leave him alone, and Sting shows footage of Bischoff and Hogan saying the retirement celebration was a scheme for fans to buy Hogan merchandise. Hogan says that's enough, and that he will fight Sting at BFG, and if Sting wins, Dixie gets the company back. Hogan covers his mouth, and Sting leaves.

Conclusion: Good episode of Impact, it really forwarded the BFG storylines. They left out RVD/Jerry Lynn, and Styles/Daniels, so, not all feuds got pushed. Not all promos were great, and Hogan's promo was realistic, but obviously bullshit.