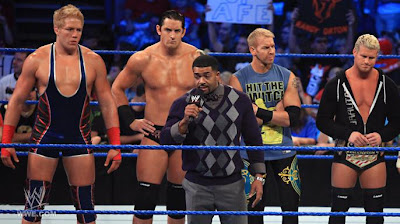 You don't lead by hitting people over the head - that's assault, not leadership
- Dwight Eisenhower
… well I guess HHH still has a few things to learn from Ike.

As imagined we begin this weeks Smackdown with the events that transpired last Monday on Raw. Despite the walkout by the WWE roster they have agreed to compete so long as HHH is not in the building. What this means for Raw is beyond me, nonetheless a quality video package to begin which really did a good job to segue through to Monday.

Thanks to Teddy, Smackdown will go ahead though …. No Zack, Teddy has it under control … you know it, bro

A solid crowd tonight in Biloxi, Mississippi. The big news tonight will be the long awaited return of Big Show, only time will tell how an impending feud will transpire considering Orton seems to always have one hand on the title, its just sad being that Show just isn't championship material anymore.

Instead of an opening bout the “union members” from Monday night come to the ring. It seems that no matter what the WWE roster thinks HHH is so over with the WWE Universe, creative will have a tough time selling this angle to the fans to get it over and behind the union members. Likewise, Otunga is struggling to sell his lawyer persona too. It does puzzle me though if indeed he is a Harvard graduate (never bothered to investigate) how can he be so rough on the mic? Another thought being following this opener is how hypocritical it is to have Otunga talk about unsafe working environments yet was tearing the very fabric of WWE apart with Nexus this time last year. In typical WWE fashion I assume we are expected to magically forget that though.

Onto tonights matches. Overall there were a strong effort from the locker room tonight, albeit a little short. The opening match rang with Del Rio and Sin Cara (face). Much criticism of late has been over how the Sin Cara's are failing to put on strong matches with talk of heading back to FCW for the luchadors. I still believe WWE management will tail them so long as Mysterio is on the roster. Nonetheless there will be day when he will need to be replaced and its this reason alone Sin Cara as a brand will be around for a long time yet. Del Rio did go on to eventually win using his patent cross arm breaker. 6/10

Next up was Airboom to take on Ziggler & Swagger. This match was a little short, I would say so as to build and save for a potential title match at an upcoming PPV. Ziggler & Swagger will need to work on their tag team symmetry so as to build the credibility of the tag titles. Still, I would love to see Vicki's new stable hold all the mid card titles despite the online dirt sheets suggesting Ziggler is about to drop the US title. 6/10

Following the commercial break it Beth's turn to show why she has become the Diva's main draw of late. She was booked to take on Alicia Fox and I say “was”, only because this match was over before it started. I understand WWE will continue to book Beth as a dominant force, its just sad when it comes at the expense of someone like Fox who you know has a lot more to offer than what she's advised to give. Yes, im still hanging for a Lay-cool return too. 5/10

After another slick recap video, this time covering Henry and Big Show's recent history, Show makes his way to the ring. While a little contrived, something you would expect from a top babyface, he did do a good job setting up Henry's ring entrance. Your right Mark, there has been a lot of changes of late. In the end this was a pretty good segment. Still, its hard to see Henry and Big Show feuding for the title while making it something people will want to see. Time will tell of course, but if talk is to have Henry hold the title for quite some time yet (I approve) Show, you gather will only be used to kill time until Orton is back in the title hunt.

Next on the card was Jinder Mahal up against Ezekiel Jackson. This was another short affair but had some high spots. It does worry me though WWE are not investing in their talents mic skills, the new breed are just not getting across with the fans evident by the sheer boredom the crowd are showing for these two rising stars. By the time the bell rung to end the match with Mahal tapping out, that feeling of relief it was over so soon could not be escaped. 3/10

For tonights main event we were treated to a four man tag battle. Christian & Cody Rhodes up against Sheamus & Randy Orton. For me, it was this match that saved the night from an in ring perspective. Strong performances from all four wrestlers. It was no surprise that Orton & Sheamus would take the win with Orton hitting the RKO on Rhodes. What was a pleasant surprise though was the intensity that Sheamus showed, when its all said and done the decision from WWE to turn him face was nothing short of brilliance. A strong match, that while didn’t really build on any history it was strong nonetheless. 8/10

Overall as mentioned it was a pretty strong night. Post events Henry and Show got physical which lead to title match being set up. As I touched on before its hard to see how this feud will sell to the WWE universe. Moving forward its safe to say with two weeks before Vengeance the match card will begin to take shape from here starting Monday on Raw. Where we will be this time next week though will be anyones guess, consdering we may not have a roster come next week. But if I was a betting man and if creative's past history is anything to go by, the end result will be anything other than what we assume.
- PROXY