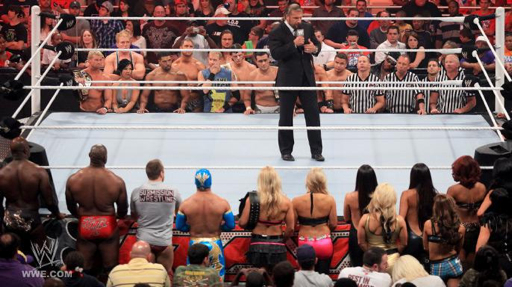 Introduction: This Raw included the fall out from Hell In A Cell, fall out from Awesome Truth's invasion, Del Rio beginning his second reign as WWE Champion, and much more.

This match was basically a squash. Mcintyre was once this promising superstar, and now he's a jobber. Orton hit another RKO on Drew, to make matters worse. Mark Henry came out, and him and Orton went at it.

Big Show return promo aired, why? Dear Jesus, WHY?! I enjoyed him being written off TV.

Another squash match. Funny thing is, it was Morrison's birthday, but he still jobbed, heh. Looks like he's getting the punishment for Melina. Henry gets the win.

John Laurinaitis segment: Laurinaitis asks Otunga if he had anything to do with Awesome Truth's invasion, but he says he doesn't care. Vickie, who's with the rest of the group, says they're sending the case to the people to see what they think. John then begins to text someone.

"Lawsuit stable" promo: Vickie is in the ring with the rest of the stars. ADR says HHH can't run a company, and Christian says Raw isn't safe with HHH as COO. Rhodes says HHH has a huge ego, and Ziggler says they're taking action into their own hands. Swagger mentions his family, Vickie says she's vulnerable as a woman, and Otunga talks about how he studied law. HHH comes out, and says they should fight, instead of hiding behind lawsuits.

Another filler match(go figure!). It ends because Kelly Kelly beats the living hell out of Beth Phoenix. Beth/Nattie win by DQ. So, Beth is the new Divas champ, she's a dominant heel, and someone like Kelly Kelly destroys her? Makes sense, not.

Triple H/John Laurinaitis segment: HHH is seen on the phone, and John comes in. John says he's sorry about Awesome Truth, but that Triple H needs a vote of confidence. HHH grabs him by the collar, telling him to round up the stars, and tell them to go to the ring later on.

Santino returns from his car accident, and defeats Jinder Mahal in another quick match! Yay! Santino is decent, but his gimmick is killing him. Santino gets the win.

Brodus Clay promo airs! Yes! Seems like WWE has somethin planned for him.

These matches are usually boring, but it was decent. It got the time needed to be decent enough. Punk's team picks up the win(of course), after Sheamus pinned Ziggler.

The refs, Jerry Lawler, and both rosters come out first. HHH, then makes his way out. HHH says the rosters are out to tell him how they think he's doing as COO. He said this job was given to him, and that he didn't ask for it. He says he's angry at Awesome Truth for not taking the punishment, not cause of what they did. He admits that he's old school, and likes battles take place. He says the fans sign the stars' paychecks, and that he works his ass off for the fans.

Wade Barrett says HHH is out of control, and that he doesn't want to be beat down in a parking lot. He says the WWE is not safe, anymore. Mike Chioda says the refs now feel nervous about coming to work, for the first time ever. He also points out HHH did nothing to Ricardo for attacking a ref. Beth Phoenix says something could happen to the women.

King comes in the ring, and says Raw is out of control. He says someone doesn't want HHH running the company, and is sabotaging him, and that everyone is paying the price. Christian says "no confidence", and King walks about. Everyone then begins to walk out, including JR! Even some ring crew workers. John Laurinaitis comes out to heat, then leaves. The crowd chants for HHH.

Conclusion: A very weak show. 4 matches were short, and the 12 man tag was the only decent match, and the one that was given a good amount of time. I'm kind of interested to see what happens with HHH. I think he's going to resign.