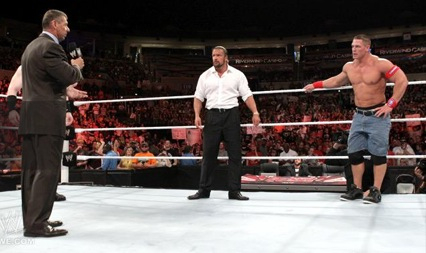 Introduction: This week's Raw was the following to the WWE walkout. How did HHH respond? Will HHH step down as COO? Well, answers were given, but did more questions arise?

Opening promo: Triple H came out to the ring, and mocks the stars who are outside holding a rally because of working conditions. He says they all have gear on, but won't compete unless he steps down. HHH says he'll never quit. HHH says he'll wrestle a broomstick for 2 hours, cause it can give better matches than some guys out in the parking out(LOL!!!). Cena comes out, and talks about working for different authority figures, but that he's staying loyal to WWE. Sheamus comes out and talks about his past with Triple H. Sheamus says he traveled miles to be a part of Raw.

Punk comes out, and says he feel like he caused all of this. He says those in the parking lot understand what he was trying to do. He says he's here to "shut up and fight". HHH announces Sheamus vs Cena, with him as the ref, and Punk on commentary.

There's not much to say here as the match barely got anything started due to Vince coming out to end the match. No contest.

Vince McMahon's return: Vince apologizes for ending the match, and that he came as soon as he could. He asks Cena and Sheamus to leave. He asks Punk to leave, and thanks them for standing up for what they believe in. Vince says he likes HHH's management style, but unfortunately, the Board of Directors are with the 55 talent members who walked out. They're worried it could get out of control, and lead to no more Raw, PPV's, etc. Vince says they're not going to take that chance, and says HHH's services are no longer required.

Vince announces until WWE finds someone to be General Manager, that the interim General Manager will be John Laurinaitis. HHH and Vince don't like the news.

Perfect timing for Vince to return, but John Laurinaitis as the GM, sucks.

Another short match. Morrison is definetely going to be released soon, he's an extreme jobber at this point. Christian picks up the win, then Christian, Ziggler, Swagger, and Rhodes attack Morrison. Beautiful!

Laurinaitis/HHH segment: Laurinaitis is on the phone with his wife, when HHH walks in. John says he didn't want the job, the board appointed him. HHH asks if John has ever tried to pick up his teeth with a bunch of broken fingers. That was an awesome line.

Before the match, Henry says he doesn't back down from anybody. This match was crappy(much like their matches have always been). Cody Rhodes came, and gave Orton the win via DQ. Henry hit two World Strongest Slams on Orton, followed by Rhodes giving Orton the paper bag treatment.

Orton getting stomped on = absolutely gorgeous.

John Laurinaitis/JR promo: John comes out, asking for respect. He announces Del Rio vs Cena for the WWE title at Vengeance. He tells Jim Ross to come in the ring. John says JR is an ingrate, and that he walked out on WWE and Oklahoma. He fires JR.

I'm sure this was done to get John over as a heel, and it worked. I don't think JR will come back, until they find that GM they're looking for.

I hate these massive tag matches. Mason Ryan/Air Boom picked up the win, in a boring match.

This match was decent, but ended due to Awesome Truth being re-hired.

John announced this as a tag match after Awesome Truth were re-hired to Raw. Not really an exciting match, Punk's team got the W via DQ. HHH made the save for Punk who was getting attacked. HHH/Punk vs Awesome Truth at Vengeance, when John backstage said he'll go to the board to make it happen.

Conclusion: Weak show. Johnny Ace as the interim GM is bogus. Short matches galore(again), and nothing really caught interest from me. Also, HHH and Punk hated eachother a month ago, now they're friends? Reminds me of Angle and Jarrett being in the same damn stable.