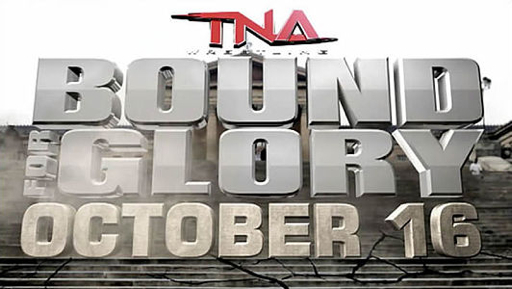 Introduction: Bound For Glory is TNA's biggest PPV of the year, equivalent to WWE's Wrestlemania. Same stage as last year's BFG, no pyro(what the hell?), and it took place in Philly. Lockdown 2009 took place in the same arena, yet had double the fans TNA had for this. Anyways, let's get underway with the Bound For Glory 11' review.

Awesome match. This was a great way to kick off BFG. Both are excellent performers, and Aries got a pop cause of his ROH tenure, which is based out of Philly. Aries wins to retain the title.

Karen Jarrett/Traci Brooks segment: Karen will be the ref for the Knockouts match later on. Brooks is told to stay in the locker room, unless something happens to Karen.

A feud that should have been buried at Destination X, re-emerged. Tables, ladders, and chairs(which is what FMM is), was the perfect stipulation for these guys to go at it. Not a good wrestling match, but entertaining, and a show of good sportsmanship after the match. RVD wins, as that was no surprise, Jerry never goes over in their matches. RVD, and Jerry, only got decent pops, but deserved better. They're ECW legends, and that's all the crowd gives them?

I don't know why this was added to the card. But, Crimson won, to remain un-defeated, in a filler match. Samoa Joe is really buried deep, and needs to leave TNA, as soon as his contract expires.

Bully Ray interview: Bully says he doesn't need an introduction, but introduces himself anyways.. okay? He says Anderson is a fool, and he says screw Anderson, screw Philly, he's Bully Ray, and he's from New York City. Ray is an awesome heel.

Anderson got a big pop, at least his current face run is paying off. Good brawl match, but not good with the wrestling. Bully Ray has gone over many times, and Anderson picks up the win. I don't care for the feud, but good decision.

Eric Bischoff/Jackson James segment: Eric says Jackson(his son), is the ref for Hogan vs Sting. Eric says Hogan must win, and Sting must be brought down.

Not really exciting, but alright match. Too much focus on Karen, who was bumped, and Traci Brooks counted the cover, leading to Velvet Sky becoming the NEW Knockouts Champion.

Kazarian interview: Kaz says he's happy for Roode. Kaz is not happy that Daniels and Styles are facing off tonight, but he hopes things end, but he knows they won't.

This feud just like Jerry Lynn vs RVD, should have ended at Destination X. I wish the match featured more wrestling. AJ Styles goes over, and Daniels quits because Styles had a screwdriver. After the match, Daniels laid Styles out on the ramp with Angel's Wings, and says AJ never beat him, so who wins now? Okay, then.

Jeff Jarrett calls Hardy out to the ring. Hardy comes out, and attacks Jarrett, and security breaks them up. D Lo Brown got a big pop from the crowd, and Hardy had his mugshot on his shirt..?


7) Hulk Hogan vs Sting, if Sting wins, Dixie gets the company back

Great match. Great display of technical wrestling, and Roode didn't win, but that's because Hogan doesn't want him as champion. Angle retained by holding onto the ropes, and Roode's hand was under the rope. Bad ending, smh.

Conclusion: Apart from some things, I enjoyed this PPV. Roode vs Angle could have done without the terrible ending, but that's me. BFG 10' was better, in my humble opinion.