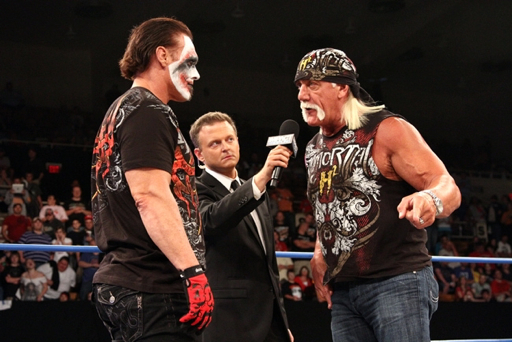 Introduction: The 10/13 edition of Impact was the go home show for Bound For Glory, TNA's biggest PPV of the year. This was the second of two tapings from Knoxville, Tennessee. Howdy, yall.

Opening promo: Angle comes out, and calls Robert Roode to the ring. Roode comes out, and Angle says Roode passed the test, and beat his Fortune friends. Angle says he'll prove he's the better man on Sunday. Angle extends the hand, but Roode refuses. Roode says at BFG, everyone will find out who has the bigger heart. Roode wants nobody getting involved on Sunday. Angle agrees, and they shake hands. Angle exits, and reminds Roode he'll take on Jeff Jarrett/Gunner in a handi-cap match.

The match started as a brawl, with both teams still brawling from backstage. This match was boring, with not a whole lot going on. AJ Styles pinned Jerry Lynn, as Daniels walked away.

Short, boring match. Matt Morgan wins, and Joe attacks him, but Crimson makes the save. Samoa Joe says it'll be him, Crimson, and Matt in a 3 way dance at Bound For Glory.

Mexican America/Ink Inc promo: Hernandez calls Ink Inc "wannabe tough guys". Ink Inc comes out, and Neal says Mex America talks all this crap about America, but the fact is, they live here(terrible promo line). Neal asks Anarquia to show his tat that Shannon Moore gave to him, Shannon says something will happen that will make everyone happy, and tells Mex America to get out. They brawl, and Christina Von Erie officially makes her debut, and makes the save for Ink Inc. Neal says Mex America can bring all the women they want at BFG, cause they have their's.

Short, yet decent. Kendrick picked up the win, which makes sense going into Bound For Glory.

Knockouts promo: Karen Jarrett and Traci Brooks came out to the ring, followed by Mickie James, Winter, Velvet Sky, and Madison Rayne. This was mostly just Velvet and Karen going at it, the whole "class" vs "trash" thing. Karen said she had to fight to get the Knockouts on PPV. Sky bumped Karen, a big brawl ensued, security broke it up.

Bully Ray segment: Bully says he's the perfect guy to be an enforcer, and that nobody better mess with him.

AJ Styles segment: AJ Styles says it's all Daniels' fault, and that he couldn't let the victory go. Styles says to remember what happened to Dreamer(I Quit match), and Daniels attacks Styles.

4) Steiner vs Anderson w/Bully Ray as the special enforcer

Not much happened but Anderson wins. Abyss turns face, when he went to strike Anderson, but struck Steiner instead. Immortal beat down Abyss.

Kurt Angle/James Storm segment: Storm approaches Angle about how Roode found out Angle got involved in his match with him. Angle says Roode still pinned Storm. Storm said Roode will take out Angle, and leaves frustrated.

Jeff Jarrett segment: Jarrett says Roode has had luck lately, but won't have it tonight in the handi-cap match.

Short, but it was alright. Angle and the rest of them beat down Roode, but Jeff Hardy made the save. I'm not a fan of Jeff, but nice way of getting him over as a face, again.

Jeff Jarrett/Jeff Hardy segment: Jeff Hardy says he returned to do good, and saved the future world champ tonight. Jarrett says he no longer respects Hardy, and that he better not show up at BFG. Hardy leaves, and Jarrett asks where he's going, and Hardy says to buy his tickey for BFG.

Hulk Hogan/Sting contract signing: Both signed the contract. Hogan rants about how Sting forced him into this match, and that he'll get the real Hulk Hogan. Sting says that's all he wants. Hogan says Sting will not make Hogan look bad. Bischoff comes out, and says if there's anything left, he'll kick Sting's ass. Hogan lays Sting out with a chair to end the show.

Conclusion: Not a good go home show. Weak hype, and nothing made it stand out that BFG is "must see". It could have been better.